Dyslexia and Me: Dyslexia, Self Esteem and Depression 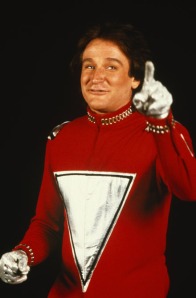 You will have had to be hiding under a rock for the last couple of weeks to have missed the extremely sad news on the passing of Robin Williams. Robin was one of my favourite actors from when I was a kid watching the reruns of Mork and Mindy with my older cousin who used to babysit for us on a Tuesday evening. I loved many of his films from Aladdin, Hook and Mrs Doubtfire to Good Morning Vietnam and Patch Adams. I think he was my first favourite actor!

Since his death my newsfeed was filled with discussions on depression and suicide. While many of the articles I’ve read have discussed links between depression and the drugs Robin was taking for early stages of Parkinson’s Disease, I have seen another link that’s closer to my heart. Robin was dyslexic and I wondered how much of a link there was between dyslexia and depression.

This blog is as much of a tribute to a great actor as it is to highlighting what I want to say about dyslexia and self-esteem. I hope that it comes across that way and not as a bandwagon post for more views. It was an article I saw talking about Robin while he was at school that seemed to resonate with me:

Robin Williams, was heavily involved in the drama department, and was voted “Funniest” and “Most Likely Not to Succeed.” – http://www.si.com/2014/08/12/seattle-seahawks-pete-carroll-remembers-robin-williams

“Most Likely Not to Succeed”? While I don’t know the extent of Robin’s dyslexia, I’ve always felt a similar burden on my shoulders. I was heavily involved in the music department at school. The honest truth was that I only stayed on until 6th year so I could take my Advanced Higher in music. I wasn’t really interested in the other subjects (other than history). I played in the rock nights that they put on two years running. I had wanted to have a career in music in some form or another.

There are a lot of people with dyslexia who do well in the arts. Many great actors and actresses have been named as having dyslexia including two of my childhood favourites, Robin Williams and Whoopi Goldberg. The arts are a very difficult area to get into whether it’s acting, music, painting, directing films or an academic in history.

I have discussed my school career a number of times now and how teachers wouldn’t accept there was a problem. I have also discussed how the other kids at school had worked out I was dyslexic from my struggles. My self-esteem went through the floor. I was a miserable teenager because I couldn’t work out why I struggled with certain things that other people found easy. I’ve only had one paid job where I felt comfortable in my entire adult life. So where am I on the ladder to success?

How do we measure success? Is it based on money or is it based on what each individual achieves for themselves? Can we really say that someone hasn’t succeeded because they haven’t become the richest person financially? I think that the outpouring of sorrow over Robin’s death shows that he really did succeed in bringing a little bit of warmth and happiness not only to his family and friends, but to his millions of fans across the world.

Before I went back into education, I had a number of jobs. I never really found my niche. In fact, the next blog I want to write is about jobs, careers and unemployment so I shall perhaps skip the details here. What I will say though was that once I went back into education and was told I had dyslexia, my life seemed to click into place a lot better than it had. My self-esteem went up as I got results back from college and through university. There were hiccups (I can’t be good at everything as my teachers had once pointed out) and I threw a few tantrums where my laptop was threatened with a large drop from a window. All in all, going back to college and university was a very positive experience for me and I felt a lot more positive about my life.

After graduating last month I have moved house and been looking for work. That’s why I haven’t been as on the ball with writing blog updates (sorry!). I keep applying for loads of different positions but it’s all knock backs or no responses. The jobs I thought I’d be perfect for have been met with ‘no’ and my self-esteem is slipping away again. Having been in this situation a number of times before, it’s difficult to stay positive. Before, I never knew I was dyslexic, so I guess some employers saw me as ‘slow’ or ‘lazy’ while going through my kookie ways of working. Now that I can say I have a ‘disability’ AND have more qualifications than I’ve ever had before, I’m STILL meeting the same brick walls.

Depression is also a frequent complication in dyslexia. Although most dyslexics are not depressed, children with this kind of learning disability are at higher risk for intense feelings of sorrow and pain. Perhaps because of their low self–esteem, dyslexics are afraid to turn their anger toward their environment and instead turn it toward themselves.

However, depressed children and adolescents often have different symptoms than do depressed adults. The depressed child is unlikely to be lethargic or to talk about feeling sad. Instead he or she may become more active or misbehave to cover up the painful feelings. In the case of masked depression, the child may not seem obviously unhappy.

However, both children and adults who are depressed tend to have three similar characteristics:

First, they tend to have negative thoughts about themselves, i.e. a negative self–image.

Second, they tend to view the world negatively. They are less likely to enjoy the positive experiences in life. This makes it difficult for them to have fun.

Finally, most depressed youngsters have great trouble imagining anything positive about the future. The depressed dyslexic not only experiences great pain in his present experiences, but also foresees a life of continuing failure.” – http://www.ldonline.org/article/19296/

I have been known to get very angry at myself. I also find it hard to communicate my anger so I bottle things up until I end up exploding. I’m always so wary of offending people because my mouth and brain sometimes aren’t in sync with each other. I have the same problem writing by hand too, brain is too fast or vice versa. I do feel very negatively towards myself, but I think it’s because I have bottled up a lot of the negative things people have said towards me rather than the positive things. It’s only been the last few years that I’ve tried to take more positives out of life, which means I take photos of EVERYTHING! A little bit annoying if you’re one of the unfortunate people on my Facebook friends list! I’ve started to force myself to do more social stuff rather than hiding away like I had in the past.

The final part of the LD Online article is the one that resonates the most with me. I had started to feel very positive about university and studying and learning and being around people who were into the same things as me both musically and academically. Now I’m back looking for work so I can pay rent, feed myself AND save for going back to do a post-graduate degree, but there are few jobs and I’m starting to feel that my degree meant very little. The only place where I have felt comfortable and in my element was behind a desk at university debating and discussing Scandinavian history with fellow students and lecturers. Now I’m out of the bubble it’s hard to stay positive when I still don’t seem to be ‘good enough’ to get even a supermarket job! (No offense meant to people working in supermarkets, I know plenty of people with degrees who do!)

So where do I go from here? What is my next step? Am I going to disappear back down the spiral or will someone be willing to give me a chance despite my kookie ways of working?

Did Robin Williams take “Most Likely Not to Succeed” to heart like I’ve taken similar mocking remarks from my high school peers? He may have proved them wrong, but sometimes it’s hard to let go of the harsh words people say to you. Perhaps we need more support for adults with dyslexia to succeed and to steer clear of low self-esteem and depression.

Before I sign off, I would like to express my own sorrow on Robin’s passing and send my love and kind wishes to his family and friends. He will always hold a place in my heart that reminds me of my childhood with my cousin and the laughter we had. He inspired me not only as an actor but as a fellow dyslexic that succeeded in making the world smile.

So until next time… Nanu nanu.